Busking in the Metaverse

Some end-of-the-year reflections on the state of the gig economy.

While much of the world is busy with more immediate concerns like where their next meal is coming from or how to find shelter from that incoming mortar round, others are celebrating their impossibly good fortune, with Facebook's version of the metaverse coming online, at least in very basic form.  Coincidentally timed just as the Omicron variant took hold of the world, with the theaters and cinemas shutting down again and all the theater-goers and every variety of gig worker going back home, or seeking other forms of entertainment -- or employment, depending. 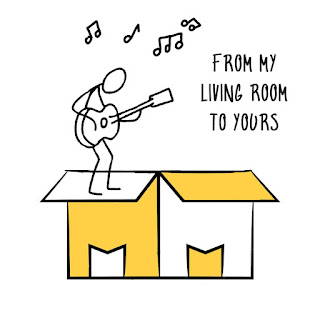 Those writing the strange history of this pandemic might come to consider August, 2021 as the brief renaissance period, the early stages of the Delta variant, when it was possible to say something like, "I had a great tour of Denmark."  But now even Denmark's viral coping mechanisms are no match for the new variant, and they're shutting down theaters and cinemas, too.

As prospects for concert tours in early 2022 are looking pretty bleak, you can bet I'm not the only musician thinking about how to get the best sound quality out of a Quest 2 headset.  I'm behind the curve as usual, and have no such headset, but what's cooking here is fairly easy to smell.  A month ago I was all ready to quit doing gigs on the internet altogether -- sick of it, like so many others.  But that was a long time ago.  Now there's Omicron.  And along with it, the metaverse.

Only midway through 2020 did I eventually learn how to make live music sound good on a livestreamed internet broadcast.  (The key, aside from fast bandwidth and a good mic, is disabling the compression.)  Way behind the curve.  And I still have no idea what to do with TikTok.  But it is one of the necessities of being a modern gig economy worker of any kind to have to keep up with technology, or be left behind.  A musician today without a Patreon account is as antiquated as a cafe that doesn't have a website, or can't process debit cards.

Future economists will surely look at early 2021 as a brief bit of respite in the saga of the ever-worsening state of affairs for the working class in the United States -- and for gig economy workers, and workers with children, in particular.

For gig economy workers with children, it was pretty impressive, if you jumped through all the right hoops.  I'm one of many musicians who will readily admit we did better in 2021 than we had done since the music industry collapsed so many years ago.

For so many if us, 2021 began with what felt like the rise of some kind of a social democracy.  The Pandemic Unemployment Assistance program meant that gig economy workers qualified for unemployment, which was new for the vast majority of us.  (It's true that PUA technically went into effect in 2020, but because of the fact that our state unemployment systems are still mostly running on Fortran, it took until 2021 before the checks started coming in.)

And then, before PUA's expiration, the expanded Child Tax Credit kicked in, and for several months some of us were receiving money for being unemployed, plus money for having kids!  It was like striking gold, or living in France or something.  And even with all that income, we still had our free health care here in Oregon.  Wild stuff.  (I spent the extra money recording albums and hiring musicians and engineers, of course.)

But then, as suddenly as the Child Tax Credit and the monthly infusion of $300 per kid had begun last summer, it ended several days ago, they say.  Maybe it will eventually get renewed, but if it does, it's unlikely to have enough support in Congress to last another year.  At a cost of less than 5% of military spending, this tax credit brought millions of families out of poverty, but it was too expensive.

The year began with a taste of the middle class life, with the beginnings of a notion of what it might be like to live in a society where the government actually looked after the interests of the regular people, where having children didn't sentence so many people to years of impoverishment.  And the year ended with all that nice stuff ending.

Back to the grind, but with Omicron shutting everything down to boot.  And then came the latest rent increase.  Did you get one, too?  The notice taped to our door informed us that as of April 1st, our monthly rent would go up by $100, bringing it to over 250% what it was when we moved into this apartment in 2007.

And I mention this not only to dwell on my own family's sorry plight, but because our situation is completely consistent with the experiences of so many millions of others across this country, where the cost of housing has been mushrooming year after year, far beyond the rate of inflation, and far, far beyond the rate of anyone's income increasing, except for CEO's and hedge fund managers, like our landlord.

So for this particular gig worker, it seems quite like it's a question of getting another job, or figuring out how to make a Quest 2 headset work with a mandola.  I'll meet you on the metastreets.  Or next time you call an Uber.

The State of the World (and A Few Predictions)

Most of the time, most people seem to be able to ignore most of what's happening in the world, and focus on certain parts, most relevant...