On Living Free, Dying, and Being A Sociopath

The far left and the far right actually have a lot in common.

I should know, because I get attacked by elements of both on a daily basis, generally online, but in lots of different spaces, by lots of different accounts, often ones managed by verifiably actual human beings, often not. 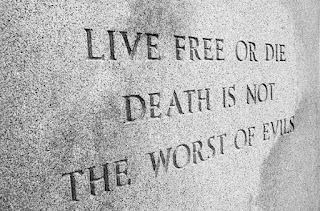 It's a strange thing to find myself saying, because I certainly have never identified as any kind of "centrist."  In many ways, the concept itself is a political fantasy, like "moderate," because they both imply the existence of two identifiable poles, between which there exists an identifiable centrist or moderate position to occupy.

But what I find increasingly remarkable are the commonalities between the attacks from both ends of what might be called the Radical Spectrum.

The most pervasive, and possibly scariest, aspect of the vitriol coming from both ends of the spectrum seems always to come back to the question of our individual rights, which, by both ends of the spectrum, are always assumed to be more important than the health of the society.  If there is concern for the health of society, it is expressed in the form of an afterthought, it's never the main line of reasoning.  The fact that the government is constantly expressing an apparent concern for the health of society is something to be suspicious of, with the unspoken assumption being that if the government supports it, there must automatically be something wrong with it.

So when it comes to public health measures necessary to get a pandemic under control, much of the public is skeptical.  They may be described as skeptical about vaccines, but I'd say it's a skepticism, if that's the right word, that far transcends any particular thing like that.  It's more a generalized skepticism of anything the government -- any government, or particular ones, depending -- might propose.

The far right is horrified by the idea of what in Denmark is known as a Corona Pass -- a form of ID that verifies you have been vaccinated and have tested negative, in order to be allowed to do things like fly in a plane with other people, sit down in a cafe, attend a festival, etc.  Through widespread vaccination and the use of the Corona Pass system, Denmark has thus far avoided the fourth wave of the pandemic that is killing so many people, especially in countries like the US, India, and Brazil.

But we can't do that kind of thing, we hear from voices on the right, because maybe the virus doesn't exist, or maybe the vaccine causes more sickness than the virus does, or even if the virus does exist and vaccines are good generally, these vaccines haven't been tested enough, and if they have, people shouldn't be required to take them, because that's an infringement on their God-given individual rights.  Their freedom to live free means they might have to die free, which is better than obeying a government mandate.  And then add to the mix the fact that the only government mandates in the US that exist with regards to this pandemic so far are completely piecemeal, local, and therefore ineffective.

And then from the corners of the left we hear that having information like our vaccination status publicly available to the relevant authorities is the next step towards total control of everything by Big Brother, and as soon as we all have submitted to the magnetic strips on our ID cards, the next step are those FEMA concentration camps that the Spectrum always agree are waiting for all of the dissidents.  Which dissidents will end up in those camps would be the main point of contention on the Spectrum.

Increasingly, alarmingly, those pointing out that the capitalist system is a global phenomenon dominated by the rich, that tends to work against the interest of the world's poor or working class super-majority, are on the sidelines of the debate.  On the Spectrum, the choice is not between the capitalist elite and everyone else.  On the right end of the spectrum, the capitalist elite are mostly Jews.  Of course this is a very difficult argument to make in places that hardly have any, like China, where so many of the world's capitalists live these days.  But people on the Spectrum are not generally swayed by logic, and so in the right corner, they can manage to blame the Jews for anything.  Relying purely on examples that appear to illustrate a point, rather than actual macroeconomics, it's easy enough to find Jewish capitalists to complain about.

And then in certain corners of the far left that take up a lot of space online as well as on the streets of cities like Portland, Oregon, comes a message that it is not so much the capitalist system that oppresses us, but what the left these days likes to call White Privilege.  Often appearing to completely overlook the ways that racial divisions have been created and used as a means to keep the working class in the US fighting amongst ourselves, this very loud element of the spectrum seeks to teach the world every day that only once white people understand how privileged we all are can we possibly seek to have an egalitarian society.

I know I am simplifying these arguments for the purposes of making a point.  But it is the strangest thing to know that most of the regular people attracted to both the far left and the far right very clearly appear to be motivated by a desire to stand up to an elite that is actively destroying the lives of so many people around the world, but they have such radically differing ideas of each other's motivations, and of the nature of the elite they oppose.

Fueled by story after story on NPR and CNN about our country's terrible history of slavery and genocide -- while they systematically ignore our country's beautiful history of multiracial uprisings and social movements -- on the far left the shouts can be heard daily on the streets of Portland and on Twitter.  "Anyone with the last name of McKenzie owes me money" I heard one person shout into a megaphone.  White Privilege is the enemy here, and a sort of Mao-reminiscent cultural revolution is the apparent answer.

While from the far right, every day I am reminded that there is what appears to be a growing culture of people who believe Jews run the world, the banks, the US government, and that the Nazi holocaust was a good thing, because it was ostensibly an effort to deal with the still-ongoing threat of the Jewish Conspiracy.  Every day I am reminded that there are people who think I should be killed for existing.  (Mainly via YouTube comments on certain videos of mine.)

If by some magic spell I could actually have the attention of both ends of the spectrum for a moment, I wish I could just tell them all how much they are being used.  Not by the Jewish Conspiracy or by White Privilege, but by the corporate elite and the think tanks which are always looking for the best ways to keep us all divided.

I wish I could communicate the fact that sometimes what a government wants actually just happens to coincide with what almost all people want.  For all the governments in the world, getting back to business is seen as a positive thing.  That doesn't mean they know how to effectively control a pandemic, but they'd probably all like to do that, basically, if I'm oversimplifying motivations here for a moment.  Regardless of what kind of political party is in power in a given country, or the type of system they have, there are certain general points of unity, and these should not be taken to be an indication of some kind of global conspiracy.  It is not in the interests of any country's leadership to have a pandemic.  Yes, the pharmaceutical industry, among other industries, will find ways to profit from any disaster.  But it's still fundamentally against the interests of any ruling party to have to rule a society that is being decimated by a virus.  We all breath oxygen, we all like clean water to drink, and pathogens make us sick.  These are not conspiracies either, it's just how it is here on Earth among us animals.

Mostly I wish I could communicate to the people so busily shouting past each other on the streets and on anti-social media that the fact is, most of them would be happy to drive around in New Hampshire, whether in an armored pickup truck or in an electric golf cart, with a "live free or die" license plate.  I know I did, happily, for many years.  This radical phrase is attractive to anyone who feels strongly about human emancipation, especially to those of us committed enough to the idea that we at least like to proclaim our preference for rising up and facing martyrdom before we consider some kind of compromise with whoever we perceive the enemy to be.  It's all very Knight in Shining Armor, Puritanical American thinking, seems to me, though perhaps noble.

Noble, until you realize that the very same people embracing the "live free or die" ethic are literally having shootouts with each other on the street these days.  Both sides openly vilify the other as monsters, and the very notion that either side is motivated by a desire to stand up to oppression, as they see it, is blasphemy to even suggest, worthy of a cancel campaign, again from either end of the Spectrum.

Those people on the right are motivated by a desire to maintain their White Privilege, say the left Puritans, who shout at them to repent, and realize how privileged they are to own a flag-draped pickup truck and a doublewide.

Meanwhile on the right, those people on the far left who keep shouting they want no borders and no nations are advocating a form of freedom that they oppose, and that they see as a sort of Trojan Horse for undermining the sovereignty of the nation, in favor of a Globalist corporate conspiracy.

Both opposed to elite rule, both accusing each other of having completely different motivations.  Of course it's easy to find the advocates of racial superiority on the right, and easy to find the lovers of Stalinist authoritarianism on the left -- proving everyone's points, whichever points those may be.

However much they may appear to be in opposition, the fact that the loudest voices against vaccine mandates, "vaccine passports," and so on, can be heard on both ends of the "live free or die" Spectrum.  If they eventually realize they have this position in common and they start protesting against vaccine mandates together here in the US, like they have been doing in some other countries, I guess we can call that a sort of left-right unity -- but not the kind we need.

Before September 11th, 2001, most of the people I knew also had one of those before-and-after dates that defined our new reality:  November ... 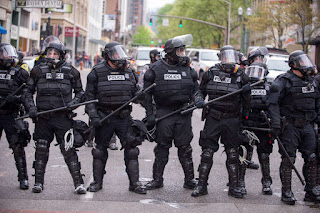