What I am saying here is familiar to many people with a knowledge of actual history, rather than the fantasy version in the textbooks.  But actual history is a hidden thing, and therefore frequent reminders are necessary.  Here's my effort in this regard for today.  We can call it an editorial.

Trump wants riot police and soldiers to "dominate," one of his favorite words as well as pastimes.  While there is certainly wanton police brutality happening every day against demonstrators and other people across this country, many people are observing the more nuanced strategies some city leaders are attempting to employ in quelling the unrest -- keeping riot police hidden in basements until their services are judged to be needed, and making sympathetic noises with regards to police brutality, current and historic racism, and police reform. 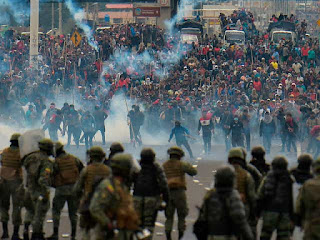 Where the advocates of domination and those with a less confrontational approach tend to unite is around what kind of protest is acceptable, and therefore defined as "nonviolent," and what kind of protest is unacceptable and therefore "violent."  Who controls this narrative, in my humble opinion, will determine whether any social movement in the US has any chance of succeeding.

To cut to the chase, the reason is this:  according to any reasonable definition of the term "violence," the definition of "violence" used by the overwhelming majority of media outlets and politicians of both parties has nothing to do with the dictionary, and everything to do with what is acceptable to them.  What makes it acceptable is that it is both legal, and ineffective.  What they call "nonviolent" is people standing in a park with signs, or marching along a prearranged route, with a permit, and a police escort, so there is no possible disruption to traffic.

What quickly becomes defined as "violent" is pretty much anything else people might do, such as any of the typical tactics employed by widely-praised, popular leaders like Martin Luther King and Gandhi.  My point is not to argue that people need to copy MLK or Gandhi's tactics of boycotts, strikes, mass nonviolent civil disobedience, and mass marches -- although this is a powerful combination of methods.  But if they are to be widely used tactics, it's crucial that marching in the streets, blocking streets, blocking bridges, and occupying buildings be understood as classic tactics in the arsenal of nonviolent civil disobedience.  To say that marchers taking over the streets or taking over a bridge are behaving in some way that is violent or inviting violence is to accuse Martin Luther King and Gandhi of being organizers of violence, to be very clear.  Also, to be very clear, the kinds of tactics employed by Martin Luther King, namely illegally and nonviolently marching in city streets and occupying them, are exactly the kinds of tactics that are currently bringing on the violent wrath of armies of riot police across this country, causing permanent injury to many civilians.

The kinds of tactics that have frequently caused social movements to be victorious, and even for governments to fall, are myriad.  They generally involve a wide variety of tactical threads, but tend to be remembered for certain ones, whether it be explicitly violent armed struggle of the sort that ultimately ended colonial domination in most former colonies of European powers, from Haiti to Mozambique, or sustained takeovers of cities by massive and overwhelmingly unarmed civilian populations, such as the protests last fall that won an end to the new fuel tax in Ecuador, or similar protests that the French labor movement initiates now and then to defeat a particularly onerous new attempt at neoliberal reform there, where workers shut down the entire country for weeks on end.  Or the massive, sustained gatherings that brought down governments in eastern Europe circa 1989.

Nowhere in the history of the world, to my knowledge, will you find a movement whose tactics were limited to writing letters to politicians or holding permitted protests and marches, that accomplished anything.  This is exactly why such tactics are acceptable to the powers-that-be, and why they are thus dubbed "nonviolent."

Trump is right about the need to dominate the streets of every city across this country.  That's exactly what needs to happen.  We can also call this occupying the streets, liberating the streets, taking to the streets, reclaiming the streets, dancing in the streets, or all of the above.  Whatever we call it, whether we like words like "domination" or "nonviolence" or not, this is one of the main tactics that has, in the past, in many different countries including this one, been effective in winning real reforms, and sometimes in toppling governments.

If we don't collectively reject the narrative that there is something "violent" about illegally occupying roads, bridges and buildings -- if we allow the media and the political elite to successfully equate "legal" with "nonviolent" -- then we've already lost.  Only if we're able to collectively reject this reformulation of the narrative of the history of the Civil Rights movement, and collectively embrace the widespread breaking of not only curfew laws, but also traffic laws, and many other laws -- only when taking to the streets really means taking over the streets, and holding onto them until we win -- might a movement of protesting in parks and marching with signs become something potentially transformational.
at June 07, 2020

Eviction Abolition: The Time Is Now

It's the beginning of the month. Do you know your neighbors? I have several questions for you. Can you imagine a society where the pro...